Recently I have really been into making French toast. I don’t follow a recipe though. I just make up my own measurements and it comes out AMAZING each time! But that’s probably because of how much cinnamon I use. While cinnamon is super yummy it also has health benefits. One thing is it has been linked with is improving insulin sensitivity.

Cinnamon comes from the branches of trees part of the Cinnamomum family and is native to the Caribbean, South America, and Southeast Asia. It has also been used in Ancient Egypt since 2000 BC. During medieval times, doctors used it to treat conditions such as arthritis, sore throats, and coughing. Behind black pepper, it is now the most popular spice in the United States and Europe.

As a spice, cinnamon can be found in powder form or whole. In whole form they come as pieces of bark. You can also find it as supplements and essential oils.

There are two main types of cinnamon: Cassia and Ceylon. Each of which have different nutritional profiles. 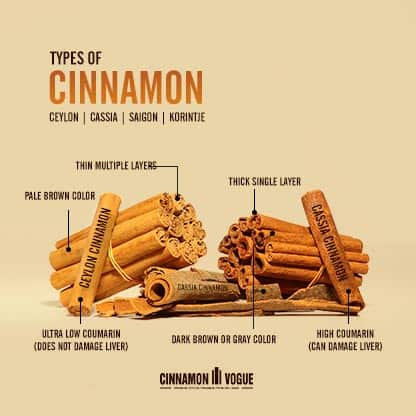 Quite a few studies suggest compounds found in cinnamon have antioxidant, anti-inflammatory, anti diabetic, and antimicrobial properties. These compounds help offer protection from disease, cancer, and other conditions. While studies are still being done to fully link all of this together, let’s talk about studies that have been conducted and offer full evidence of cinnamon benefiting.

In 2016, a laboratory study conducted found cinnamon oil is effective against some fungal infections. One type of Candida that affects a persons bloodstream was treated. Scientists believe the oil helped due to its antimicrobial properties.

Though animal studies are still being done, in 2015 a study showed cassia cinnamon may help reduce blood sugar levels. When done on humans, 60 people with type 2 diabetes consumed up to 6 grams of cinnamon a day for 40 days to 4 months. When all said and done, each participant had lower serum glucose, triglycerides, low-density lipoprotein cholesterol, and total cholesterol.

While studies are still being done, some animal research has suggested cinnamon helps with Alzheimers prevention. There’s an extract in cinnamon bark called CEppt which contains properties that may help prevent Alzheimers symptoms from developing. The mice who received this extract experienced a decrease in features of Alzheimers. Their ability to think and reason improved and the feature amyloid plaques decreased. Though research is still being conducted in its effectiveness, this could be useful in developing therapies for those with Alzheimers.

As mentioned above, cinnamon may help prove insulin sensitivity. Studies done have shown improvements in glycemic control in those with diabetes. Cinnamon not only reduced the blood sugar but it also improved the sensitivity to insulin. The study also saw eating it with meals that are high in carbs may help in the prevention of blood sugar spikes. However, this is not a long term solution and more research is being conducted.

Incorporating Cinnamon in Your Diet

One thing I really enjoy is roasting sweet potatoes with a little bit of honey and LOTS of cinnamon. This is kind of a win win scenario too because sweet potatoes are VERY good for your health.

A friend of mine likes to put a teaspoon of cinnamon in her hot chocolate. While I haven’t tried this it does smell amazing.

A recipe I found online uses apples and cinnamon to make muffins!

Lastly, I love bread pudding! It is so yummy especially when I add a scoop of vanilla icecream. But this is definitely not something I share. So if you find a recipe you love always make sure you make enough to share.

While more research is still being done, there is research that has already proven cinnamons benefits. Be sure to keep a lookout for more research coming out as scientists are still working hard. But in the mean time try incorporating it in your diet. You never know how it might benefit you. Just maybe not try the cinnamon challenge, as its not very safe or yummy.

The past few weeks in my patient skills care class we have been using gait belts nonstop, literally. The moment we walk into lab the…
END_OF_DOCUMENT_TOKEN_TO_BE_REPLACED

END_OF_DOCUMENT_TOKEN_TO_BE_REPLACED

Between the surgeon general recommendations for exercise to improve overall health risks, general benefits of weight loss and energy levels, and the positive impact…
END_OF_DOCUMENT_TOKEN_TO_BE_REPLACED

END_OF_DOCUMENT_TOKEN_TO_BE_REPLACED

There is a very interesting diagnosis we come across in our clinic from time to time known as conversion disorder.  This diagnosis sometimes has a…
END_OF_DOCUMENT_TOKEN_TO_BE_REPLACED