We provide fast elbow pain relief without drugs or surgery to help you feel better and live better.

Schedule an appointment with a Physical Therapist

Elbow Injuries and Conditions We Treat

What is it: Contracture of the elbow can be described as a stiff elbow joint. It won’t move all the way into flexion, extension, or both. Sometimes the person has trouble turning the hand palm up or palm down. The cause can be from something intra-articular (inside the joint) or extra-articular (outside the joint).

Statistics: Stiffness of the elbow impairs hand function, because this is highly dependent on elbow extension and flexion and forearm rotation. A 50% reduction of elbow motion can reduce the upper extremity function by almost 80%

Important Facts: Trauma and heterotopic ossification (HO) are the most likely causes of elbow contractures. Elbow dislocations and damage to the nerves are the most common results of elbow trauma. HO is the formation of calcified bone in the soft tissue. It is another potential consequence of elbow injury. But HO can also occur as a result of head injury, burns, and Paget’s disease. Genetics may also play a role in HO. These are extra-articular conditions that do not occur directly in the elbow but affect the elbow.

Treatment Duration: Whenever possible, prevention is the main focus of management for elbow contracture. Exercise and splinting can help prevent loss of motion after trauma. Patients with known risk factors for HO should be treated prophylactically. This means treatment is given ahead of time to prevent the problem from ever occurring. Non-steroidal anti-inflammatory drugs (NSAIDS) and low-dose radiation are used as preventive agents most often.

What is it? Tommy John surgery — the colloquial name for ulnar collateral ligament reconstruction — is a surgical procedure that aims to repair ligaments in the elbow. The procedure has become synonymous with sports medicine, particularly in baseball, because pitchers can cause damage to the ligament, which is located on the inside of the elbow joint.

The procedure was first performed in 1974 by Dr. Frank Jobe, who today serves as a Special Advisor to the Los Angeles Dodgers, and is named after former major league pitcher Tommy John whose 288 career victories ranks seventh all time among left-handed pitchers.

When John’s surgery was completed in 1974, Jobe gave the player a 1 in 100 chance of making a successful return. Today the recovery rate is almost 85 percent. In 2003, USA Today reported that in the previous two seasons, 75 of the almost 700 major league pitchers had undergone Tommy John surgery — almost one in nine. With 288 career wins, Tommy John remains the pitcher with the most wins to have undergone the surgery that bears his name.

Jamie Moyer was far from a lock to make the roster this spring after missing the 2011 season because of Tommy John surgery, but now has thrown shutouts in four decades and has a lower ERA since turning 40 (4.40) than when he was in his 20s (4.56).

Treatment Duration: The initial rehabilitation time between Tommy John’s UCL surgery and his return to the majors was 18 months, or basically the end of the ’74 season to the beginning of the ’76 season (technically, from 9/25/74 to 4/16/76.

Do’s/Don’ts: Kremchek explains, “The crucial element is communication between the surgeon, therapist, trainer and pitching coach. When you diagnose a UCL injury you don’t want to waste a ton of time with the rehab. Go straight into surgery.” BP’s Injury Database concurs. Surgery produces a much higher success rate than just straight rehab.

What is it?  Bursitis (ber-SEYE-tis) is swelling and pain of a bursa. A bursa is a fluid-filled sac that acts as a cushion or shock absorber between a tendon and a bone. A tendon is a cord of tough tissue that connects muscles to bones. Although you cannot feel it, the elbow bursa is behind your elbow (over the pointed tip). Normally a bursa has a small amount of fluid in it. When injured, the bursa becomes inflamed (red and sore) and may fill with too much fluid. Olecranon (oh-LEK-rah-non) bursitis is a type of elbow bursitis when the bursa in your elbow becomes inflamed. With treatment, your bursitis should go away in one to two weeks.

Important Facts: Bursitis may be a long-term problem that comes and goes over time. Your bursitis may happen suddenly if it is caused by things like infection or a hard hit to the elbow.

Treatment Duration: Surgery for infected bursa. If the bursa is infected and it does not improve with antibiotics or by removing fluid from the elbow, surgery to remove the entire bursa may be needed. This is often an inpatient procedure, meaning you will need to stay overnight in the hospital. This surgery may be combined with further use of oral or intravenous antibiotics.

Surgery for noninfected bursa. If elbow bursitis is not a result of infection, surgery may still be needed if nonsurgical treatments do not work. In this case, surgery to remove the bursa is usually performed as an outpatient procedure. The surgery does not disturb any muscle, ligament, or joint structures.

Recovery. Your doctor will apply a splint to your arm after the procedure to protect your skin. In most cases, casts or prolonged immobilization are not necessary.

Although formal physical therapy after surgery is not usually needed, your doctor will recommend specific exercises to improve your range of motion. These are typically permitted within a few days of the surgery.

Your skin should be well healed within 10 to 14 days after the surgery, and after 3 to 4 weeks, your doctor may allow you to fully use your elbow. Your elbow may need to be padded or protected for several months to prevent re-injury.

What is it? Tennis elbow (lateral epicondylitis) is an overuse and muscle strain injury. The cause is repeated contraction of the forearm muscles that you use to straighten and raise your hand and wrist. The repeated motions and stress to the tissue may result in inflammation or a series of tiny tears in the tendons that attach the forearm muscles to the bony prominence at the outside of your elbow (lateral epicondyle).

Statistics: The National Golf Foundation’s records show an estimated 12.98 million core adult golfers, with over 27.8 million golfers in the United States alone as of 2004. There are over 16,000 golf facilities in the United States. In 2002, golfers spent over $24.3 billion on equipment and fees.

Important Facts: As the name suggests, playing tennis — especially repeated use of the backhand stroke with poor technique — is one possible cause of tennis elbow. People who have jobs that involve repetitive motions of the wrist and arm are more likely to develop tennis elbow. Examples include plumbers, painters, carpenters, butchers and cooks.

Left untreated, tennis elbow can result in chronic pain — especially when lifting or gripping objects. Using your arm too strenuously before your elbow has healed can make the problem worse.

Do’s/Don’ts: Heavier racquets are healthier racquets. While an equipment change is not always necessary, it oftentimes is the best way to address TE. We carry demo racquets that have proven to be healthy and invite our customers to give them a try for an extended period. We know from experience that a 12oz racquet can be easily handled by children in their teens and adults alike. In fact the extra mass of the racquet is not only healthier, but can generate heavier and more penetrating strokes off the ground and at the net.

Common Myths: MYTH #1: Tennis elbow is most often caused by improper technique and bad mechanics. OUR BELIEF: When initial research on Tennis Elbow (TE) was conducted flaws in technique and mechanics were often cited as the cause of the discomfort. While serious flaws in technique continue to be a legitimate cause of TE, it is no longer the primary cause. The number of those suffering from TE over the past several years has risen dramatically. The cause is no longer primarily related to mechanics, but rather is related to equipment.

What is it? Trying to break a fall by putting your hand out in front of you seems almost instinctive. But the force of the fall could travel up the lower forearm bones and dislocate the elbow. It also could break the smaller bone (radius) in the forearm. A break can occur near the elbow at the radial “head.”

Statistics: Fractures of the distal radius account for one-sixth of all fractures seen in the emergency department.

Approximately 10 percent of all elbow dislocations involve a fracture of the radial head.

Important Facts: Even the simplest of fractures will probably result in some loss of extension in the elbow. Regardless of the type of fracture or the treatment used, physical therapy will be needed before resuming full activities.

Important Facts: Because of the anatomic positioning of the ulnar nerve, it is subject to entrapment and injury by a wide variety of causes.[1] It is the second most common entrapment neuropathy in the upper extremity (the first being the median nerve and its branches). Because of its superficial position at the elbow, it is often injured by excessive pressure in this area (leaning on the elbow during work or while driving a car).

Treatment Duration: The treatment of ulnar neuropathy at the elbow can be conservative (splint devices, physical therapy, rehabilitation) or surgical.

Nonsteroidal anti-inflammatory medications also are useful adjuncts to relieve nerve irritation. Oral vitamin B-6 supplements may be helpful for mild symptoms. This treatment should be carried out for 6-12 weeks, depending on patient response. Surgical intervention is indicated if increasing paresthesias occur despite adequate conservative treatment and at the first sign of motor changes 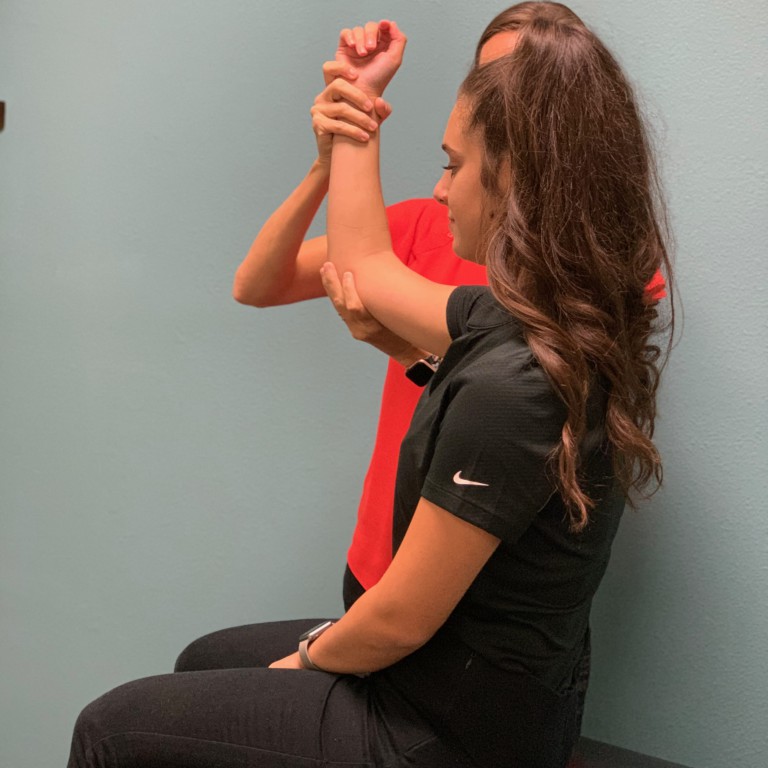 Trauma: If you are excessively gripping things, such as golf or tennis with impact, the elbow could be injured from repetitive stress. The junction where the tendon and muscles join at the elbow is not that strong, and if you have repetitive trauma, that part will start to strain over time. Also, if you happen to fall on your hand or wrist, the elbow will absorb most of the force. Depending on how hard the impact, you can cause injury to the elbow.

Overuse Injuries: Many jobs, household activities, and physical activities that can cause overuse injuries of the elbow when you strain your elbow by using it too much or using it for a repetitive movement that hurts the muscles, joints, or bones in your arm.  Your elbow is a joint in your arm that is made up of three bones: Your upper arm bone (humerus) and two bones in your forearm (radius and ulna).

Don’t put it off any longer. The more you wait the more serious your problem may become.