Gestational diabetes is a type of diabetes first diagnosed during pregnancy. It has the potential to cause harm to you and your baby if not treated. According to the American Diabetes Association, 10% of pregnancies in the US are affected by gestational diabetes every year. The influx of hormones produced during pregnancy can result in a blockage of the mother’s insulin to her body causing a problem called insulin resistance or the mother might not be able to produce enough insulin creating a problem called hyperglycemia (high blood sugar). Blood sugar levels usually return to normal following the delivery of the baby. However a mother’s risk for type 2 diabetes increases there-after.

There is not an exact cause of gestational diabetes. But many risk factors can result in this diagnosis such as being overweight or obese prior to pregnancy. Additional risk factors include minimal physical activity, polycystic ovary syndrome, previous gestational diabetes or having been pre-diabetic, having had previous children weighing more than 9 pounds. Race also plays a role in this condition including black, American Indian, Asian American, Pacific Islander, Hispanic.

Gestational diabetes can create complications for a mother and the baby. Possible complications for the mother include high blood pressure (pre-eclampsia), a cesarean delivery, and an increased risk of type 2 diabetes in her future. Complications arising for the baby include excessive birth weight, birth preterm or early birth, difficulty breathing, low blood sugar levels (hypoglycemia-can lead to seizures), obesity, type 2 diabetes, and a stillbirth.

Diagnosing gestational diabetes is completed during weeks 24-28 of your pregnancy. A glucose challenge test is performed involving the drinking of a sugar solution. It then will be followed by a blood test one hour later. Gestational diabetes will be suspected if sugar levels are recorded above 190mg/dL. Normal readings are 140 mg/dL and below.

Treatment for this condition includes healthier eating, exercise, blood sugar monitoring, and medication. Seek a registered dietitian for an appropriate food plan to include fruits, vegetables, whole grains, and lean protein in your diet. Ask your MD for clearance to exercise. But when exercising aim for 30 minutes of moderate activity. This includes walking, swimming, cycling, housework, and gardening. When monitoring blood sugar levels, values should range as follow:

Although gestational diabetes might seem nerve wrecking, it is treatable! Seek assistance from your medical providers to ensure a safer pregnancy and delivery.  (: 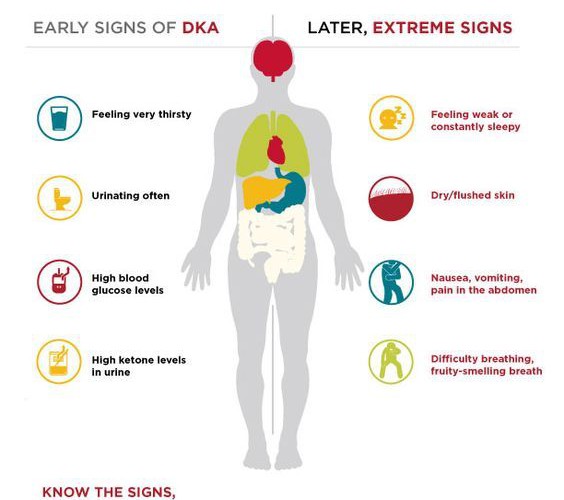 People with diabetes might be affected by DKA or Diabetic Ketoacidosis. This is a life-threatening problem that occurs when a persons body breaks down fat…
END_OF_DOCUMENT_TOKEN_TO_BE_REPLACED